Solidarity, agonism and entre-soi in the village meals of the Causse du Quercy

In the area of South West France known as Quercy, summer is epitomized by a succession of feasts in many of the villages: they last about 3 days and always culminate in a communal meal on the Monday night. Social actors and commentators claim that these feasts and the communal meals are festive affairs : indeed they are, but underlying tensions are particularly obvious during the preparation and consumption of the communal meals where features associated with community building coexist with mild rivalries, agonism and a desire for entre-soi (French noun: literally, a situation where one keeps company with people who are socially and culturally similar to oneself). Keeping this in mind, and using data gathered over the last 30 years in the Quercy, I am discussing the central role played by the communal meal in community building, but also in the reinforcement of agonism between villagers and villages. I am paying special attention to the semiotics of the food eaten during these meals, sustained as it is by metagastronomic discourses that complement the meaning of these meals. 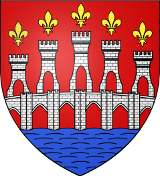